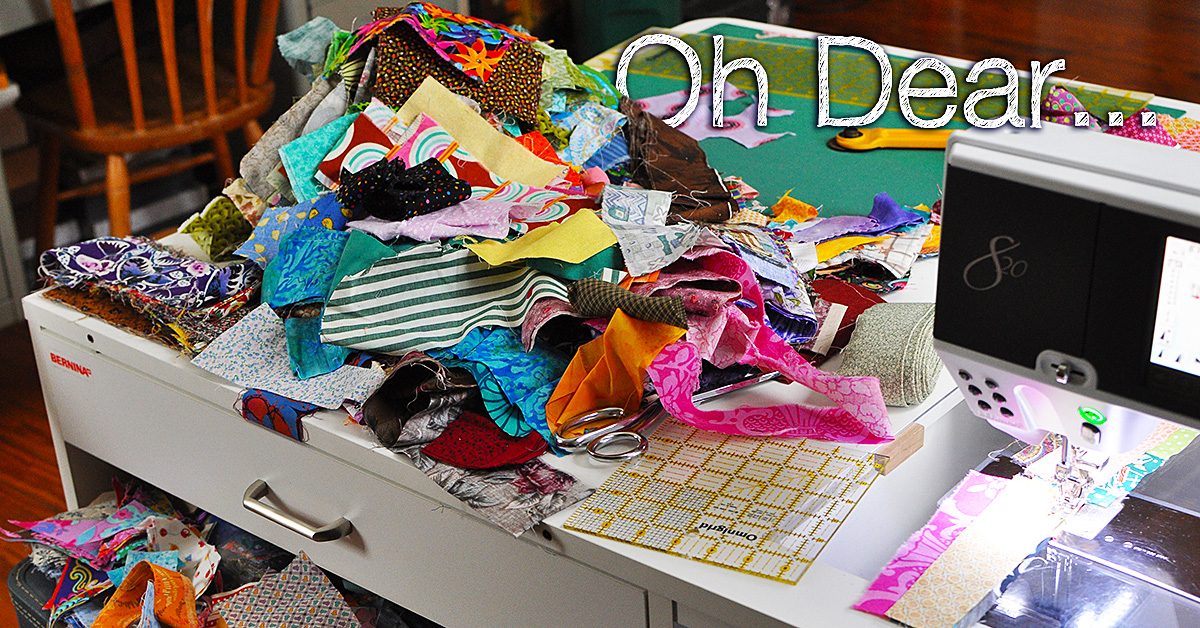 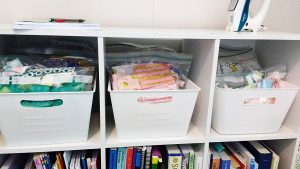 It only took me six months, but I finally organized my fabric scraps after our move.

It only took me six months, but I finally organized my fabric scraps after our move to this new town and new house. When we made the move, I dumped my two huge bins of scraps into a few shopping bags and tucked them away until this glorious moment when they would not only be sorted, but have a place to reside. 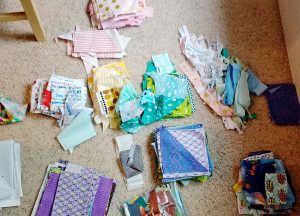 Why should one keep & organize fabric scraps?

Why should one keep and organize fabric scraps? Here are some reasons to consider. 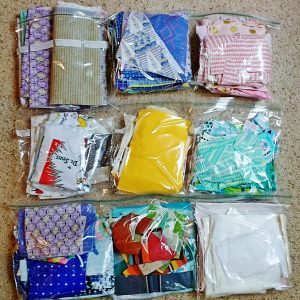 I ultimately made 9 bags of folded scraps.

I ultimately made 9 bags of folded scraps. They included the following (from left to right):

One of these things is not like the others… 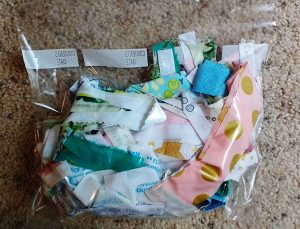 Bag #10 holds all of my selvage edges & very thin strips of fabric.

There is also a 10th bag (but it didn’t fit well in the group photo above). This holds all of my selvage edges and very thin strips of fabric. I have a huge wish list of projects to make from selvage edges. Perhaps I’ll write a post soon showing you the world of possibility with saving those thin strips!

A place of and for my own making 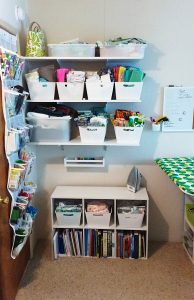 Welcome to my fabric corner. 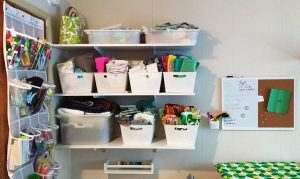 Dirty little secret: I just tuck larger pieces in wherever I find room.

I’d love to tell you that I have my larger pieces organized in some kind of fancy way, but I really don’t. I just tuck them in wherever I find room. 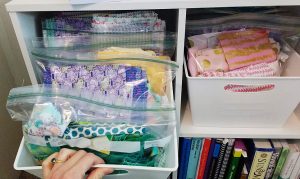 Can you see how lovely the organization of these scraps is? The easy access and keeping them visible by my work space means I’m often including them in my daydreaming when it comes to new sewing projects.

Do you store your fabric scraps? If so, tell us where or how you do! 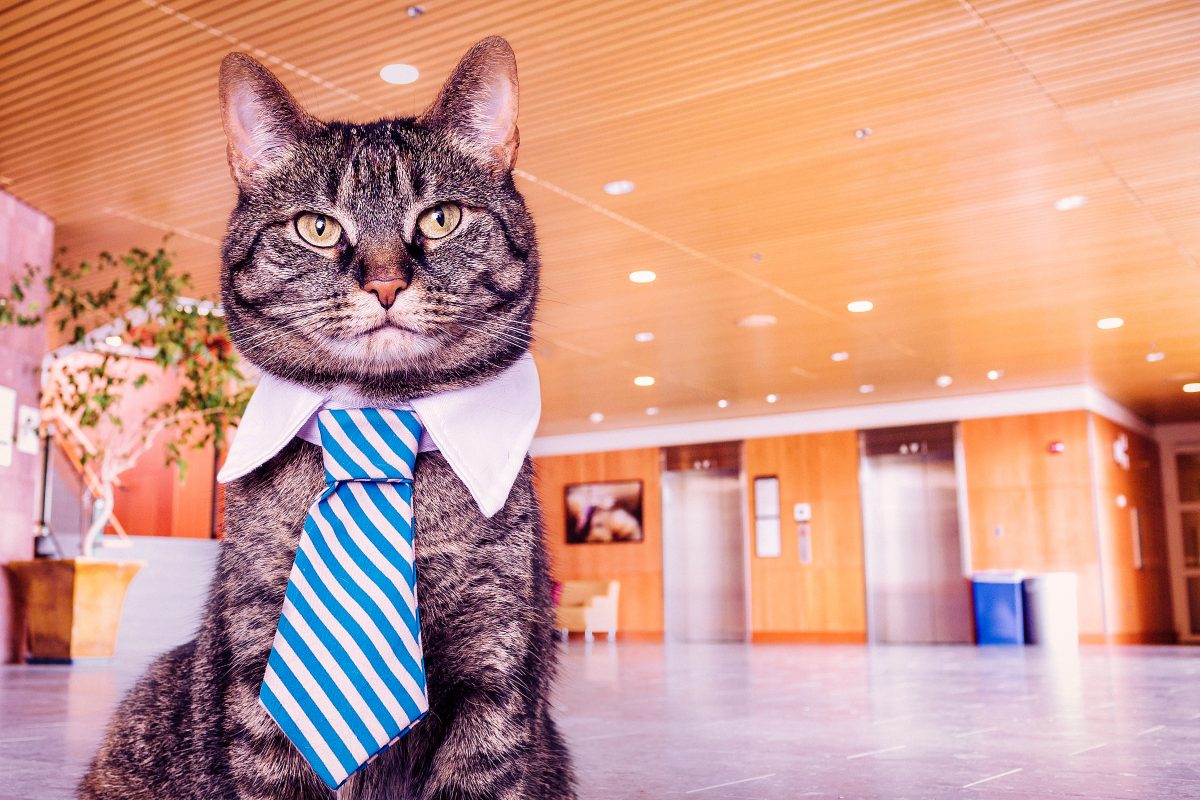 Once upon a time, I attempted the 101 goals in 1001 days challenge. Ever heard of it? Basically, you come up with 101 goals (at least, that’s the goal—you can decide whether or not that pun was intended!) and you give yourself 1001 days to finish up said goals. It’s a fairly simple idea, and I was intrigued enough to come up with that many things and start on working toward success for the list.

I think I finished writing the list. But I did not finish accomplishing the goals on that list.

I later tried again. Some of the goals might’ve been new. Some might’ve been on the earlier list. Still, I made a list (I think it was full!) and started over.

Again, I didn’t finish with that whole accomplishing-thing.

Even though I might loooove making lists (Nerd? Probably!), I don’t think I’ll ever make a 101-in-1001 list and see the process through. Why? A couple of things are worth mentioning for reasons.

One is that I don’t know what I’ll want to do in over two years. I might know big things, maybe even *some* small things, but to commit myself to 101 things that’ll fit my plans approximately 2.74 years from now? Doubts are reasonable! 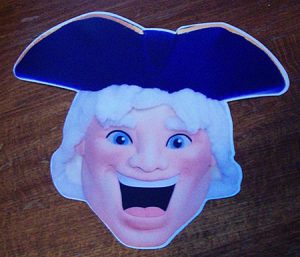 Also, while going through the process earlier, I found that my goals changed, and my beginning list didn’t really fit at a certain point. Possible example: I think I was working on my MA in Ancient & Classical History for the beginning of one list, maybe both. I never got that degree, but I did end up getting a fancy MA in English and Creative Writing. The school I graduated from even sent me this little guy for social media potential. Lucky me!

The point? I accomplished something, but not what I named if I specified what I wanted an advanced degree in. Things change, and my lists might not have kept up with those things.

And even if the changing goals wasn’t an issue, who actually has 101 things they want to do at any given moment? I might have to make a few things up or stretch my imagination to come up with that many goals—which could heighten the chance that I won’t want to continue with said goals. A scrambled-after goal isn’t necessarily the strongest one. I mean, if I didn’t *seriously* want to do something in the first place and had to think waaaaay outside of the box to come up with it, why make an extended effort to accomplish it? Am I right?

I bring this up because, while I don’t feel like I’m overly good at committing tiny goals to myself for the so-distant future, I do still have goals. Beyond that detail, I also like the idea of giving myself a cut-off for those goals. And, as I said, I like making lists like this!

So… I’m going to do another one! This time though, instead of having such an extended time period of a 101-list of potentially made-up goals, I’m going to focus on something more foreseeable and sizable. The smaller the time span, the less time there is for goals to change. The smaller the number or goals, the higher priority they have to be before they make the list (and the smaller the chance that I made them up as fillers!). Combined, the scenario could make my list more doable and successful. Maybe. Possibly. Hopefully? 🙂

An early step of this process is clearly to come up with that list. And no, I don’t have a finished list to hand to you. Instead, I’m announcing that this will be a concept that will likely pop up on blog posts in the future. This list and these goals won’t be the focus of all future posts, but they might show up as casual “Hey! New Goal!” mentions. If you see one of those at some point, reading this post will have given you a warning about what’s going on!

In early 2017, I plan to have a specific, finished list of quilting/sewing goals to tend to during the year. One year at a time, maybe a dozen goals at a time, seems more like a potential recipe for success than scrambling for something to list and pretending what I want will stay what I want for a long time. I can focus on what I do want to do, and take it in small enough batches that could lessen the likelihood that my interests will do a one-eighty!

But I do have a goal or six to start off with, so my list has already begun! Want to read the goals so far? Here you go!

Six goals to start off, and months left to build! Hopefully, the months leading up to 2017 can help me gain ideas through projects and posts.